Read the following history about an Otter that was delivered to the Ontario Provincial Air Service the same day as the Otter I currently fly. I guess they would be considered "twin" siblings. ODQ still flies today, with me at her controls, but ODP perished years ago, although through "organ donation", her legend still "flogs the bush".........

All information is from Karl Hayes' "masterful" CD entitled:

Otter 103, registered CF-ODP to the Department of Lands & Forests, was delivered to the Ontario Provincial Air Service (OPAS) on 20th June 1956, based at Sault Ste.Marie, Ontario. It was their fourth Otter, CF-ODJ, 'ODK and 'ODL having been delivered during 1953. One incident is recorded early in the career of ODP. On 4th October 1957 on a regular requisition flight from Shebandown to Port Arthur, the Otter force landed on the Shebandown River near Sunshine, Ontario due to a broken cylinder. The Otter had been carrying two passengers and 300 pounds of cargo. There was no damage and the engine was repaired. As with the other OPAS Otters, number 103 was re-registered on 6th September 1972 to the Ontario Ministry of Natural Resources as C-FODP and continued to serve the Province's bush country.

Sadly, the Otter came to grief at Nym Lake, Ontario on 23rd July 1976 and was destroyed. Shortly after becoming airborne, the left wing dropped and struck the water. It was a warm, summer's day with a temperature of 23C and a wind of 15 knots. The subsequent report blamed the accident on “improper compensation for wind”. The aircraft turned approximately 150 degrees after the wing struck the water and crashed on the shore of an island. Fire started on impact and consumed most of the aircraft, although there were no injuries to the pilot and four passengers. The wings and rear fuselage were noted at Carp, Ontario in September 1982, to be used in the repair and rebuild of other Otters. The registration C-FODP was officially cancelled in March 1984. 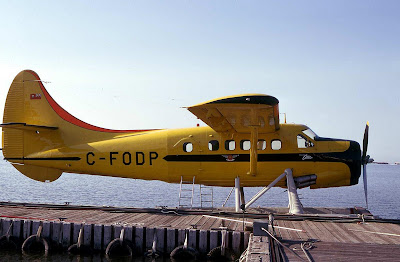 "In the untimely loss of your noble son, our affliction here, is scarcely less than your own. So much of promised usefulness to one's country, and of bright hopes for one's self and friends, have rarely been so suddenly dashed, as in his fall."

"Some people spend an entire lifetime wondering if they made a difference. The Marines don't have that problem."

"Going to war without France is like going deer hunting without your accordion."

"Hope is not a strategy."

"Had we lived I should have had a tale to tell of the hardihood, endurance and courage of my companions which would have stirred the heart of every Englishman. These rough notes and our dead bodies must tell the tale."

"Success is not the result of spontaneous combustion. You must set yourself on fire."

"When everything seems to be going against you, remember that the airplane takes off against the wind, not with it."